Bet on The St. Leger Stakes 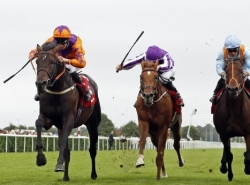 The St. Leger Stakes is one of the premier races in England and has a rich history spanning over 200 years. It was inaugurated in 1776 and is the oldest of Britain’s major races. The race is held at Doncaster every September and is the final jewel of the English Triple Crown which is made up of the 2000 Guineas and the Derby. The St. Leger Stakes is a true test of a horse’s stamina and is contested at one mile and six furlongs (1 13/16 miles) for three-year-old colts and fillies. The purse is currently L$700,000.

Some of the greatest horses in the history of horse racing in Great Britain have won the St. Leger Stakes and in 2008, Conduit became the first horse to win both the St. Leger Stakes and the come stateside to win the Breeders’ Cup Turf (G1). Jockey Frankie Dettori has been one of the most successful international riders in contemporary times and has won the St. Leger five times though has a ways to go to catch up to jockey Bill Scott who piloted 9 winners in the 1800s. Trainer John Scott has the record for the most wins with sixteen which he recorded from 1827 through 1862.

Bet on the St. Leger Stakes and other major UK horse races through one of these recommended racebooks.

The 2016 edition of the St. Leger Stakes was a wide open affair with Idaho, a regally-bred colt for the powerhouse combination of Aiden O’Brien, Susan Magnier, Derrick Smith and Michael Tabor, the odds-on favorite. Harbour Law, a relative unknown, was a longshot at odds of 22-1. The modestly bred colt had never won a major stakes race and had only a maiden win and a handicap victory to his credit though he appeared to be improving with added distance.

Harbour Law settled off of the pace in the back of the pack and began to steadily improve his position. In a stroke of racing luck, Idaho stumbled badly, unseated his jockey and at that point, the race became up for grabs. Housesofparliament and French stakes winner Ventura Storm looked to be the top contenders for the win but Harbour Law closed brilliantly to prevail by three-quarters of a length. Trainer Laura Monagan made history and became the first woman to saddle a winner of the St. Leger Stakes.