Bet on The Sprint Cup Stakes 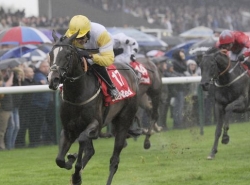 The Sprint Cup Stakes one of the biggest races in Great Britain for sprinters and is held annually every September. The race is a relatively new addition to the racing landscape and was run for the first time in 1966. The race boasts Group 1 status and is held at Haydock Park in Haydock, England. It is run on the turf and is open to three-year-olds and upward.

While the history of the race is short compared to the centuries of history some of Great Britain’s other marquee races have, there has been no shortage of star power. The great Danehill won the race in 1989 and notched one of his biggest wins as a racehorse. His impact on the breeding industry has been legendary since then and he is one of the most important and influential sires of all time. In addition to Danehill, the Sprint Cup Stakes has produced several other horses who have gone on to strong stallion careers including Dayjur and Invincible Spirit.

Trainer John Dunlop has the current record of the most victories with four and the race for leading jockey remains contentious – Lester Piggot, Pat Eddery, Willie Carson and Bruce Raymond are all tied with three wins each.

Bet on the Sprint Cup Stakes and other major UK horse races through one of these recommended racebooks.

The 2016 edition of the Sprint Cup Stakes shaped up to be a competitive event with the filly, Quiet Reflection, tabbed as the favorite at 7-2 odds. The multiple stakes winning filly was coming into the race in good order after a competitive effort against older rivals in the Group 1 July Cup. Though top contender Limato was a late scratch, the field was still competitive and included formidable rivals such as The Tin Man, Dancing Star and Only Mine.

Quiet Reflection, proving her adjustability, rated off of the front-runners in mid-pack and began to steadily make progress. As they turned for home, jockey Douglas Costello asked his filly to accelerate and she responded effortlessly to win by a length and three-quarters over The Tin Man and Sudedois. The win was the seventh of her career from nine starts and her biggest victory to date. Her next start is speculated to be the British Champions Sprint Stakes at Ascot.