Bet on The Sire Produce Stakes 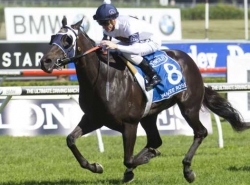 One of the oldest and most prestigious races in Australia, the Sire’s Produce Stakes is held annually every April as part of the autumn racing carnival at Randwick Racecourse in Sydney, Australia. The race is restricted to two-year-olds and is contested on the turf at a distance of 1400 meters which translates to seven furlongs. The race currently offers a purse of $1 million and is a coveted Group 1 event.

The race was run for the first time in 1867 and is the middle leg of Australia’s two-year-old Triple Crown which includes the Golden Slipper Stakes and the Champagne Stakes. Traditionally, it is believed that precocious juveniles make the most successful stallions and the Sire’s Produce Stakes is designed to showcase the next generation of Australia’s breeding stock.

Some of the all-time greats in Australian racing history have won the Sire’s Produce Stakes including Tulloch in 1957. Throughout the course of his career which landed him in Australia’s Hall of Fame, he won from 1000 meters (five furlongs) all the way to 3200 meters (two miles). Another noteworthy winner was Sebring who won both the Golden Slipper and Sire’s Produce Stakes before being defeated by a nose in the Champagne Stakes in 2008.

Bet the Sire Produce Stakes and other classic Australian horse races with these recommended online racebooks.

The 2016 edition of the Sire’s Produce Stakes drew a quality field of eleven contenders including the Golden Slipper Stakes runner-up, Yankee Rose. The filly was taking on male rivals but had already proven she could hold her own at that level and went to the gate as the favorite.

She broke alertly and was eager to secure the lead despite efforts from jockey Zac Purton to get the filly to rate. She did eventually give in and settled to stalk the pace in mid-pack before launching a strong rally from the middle of the track to win by two-lengths. The diminutive daughter of All American stopped the clock in 1:24.38 while Telperion settled for second and Faraway Town was third.

Check back closer to the race for the contenders for the 2017 Sire’s Produce Stakes!