Bet on The Queen Elizabeth Stakes 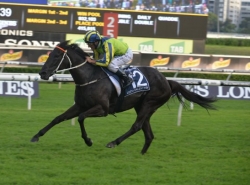 Over the course of its history, the Queen Elizabeth has had three different names - the Queen's Plate, AJC Plate, and AJC King's Cup - before assuming its current moniker in 1954. Likewise, the race has been run at a variety of distances, holding at its current 2000 metres distance since 1986.

In the illustrious history of the Queen Elizabeth such notables as Chester, Carbine, Poseidon, Phar Lap, Peter Pan, Russia, Tulloch and Lonhro are among its past winners. With the exception of a two-year hiatus in 1942 and 1943, the race has been held without interruption since 1851. With a significant purse hike in 2014, the Queen Elizabeth figures to attact more top international competition.

Bet the Queen Elizabeth Stakes and other classic Australian horse races with one of these recommended racebooks.

The 2016 Queen Elizabeth produced a minor upset as the New Zealand-bred Lucia Valentina earned the third Group 1 victory of her career with a come-from-behind score to top favored Irish runner The United States by two and a quarter lengths. Happy Clapper, a Randwick specialist, finished third. Despite a troubled trip, the winner displayed a strong late closing effort to notch a comfortable score. The one-time $60,000 purchase ran her career earnings over the $4 million mark with the victory.

Check back closer to race day for the 2017 Queen Elizabeth Stakes contenders!