Bet on The Pennsylvania Derby 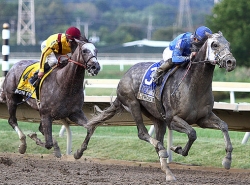 The Pennsylvania Derby has grown into one of the cornerstone events at Parx Racing and Casino and while the racetrack has undergone several name changes and face lifts over the years, the race has been a mainstay since the inaugural running in 1979. Located in Bensalem, Pennsylvania, the Pennsylvania Derby is restricted to three-year-olds and is one of the final opportunities for sophomores to compete against age-restricted competition before being force to take on older rivals. The race currently offers a purse of $1 million as well as Grade 2 status and is run at a mile and an eighth on the main track.

Run for the first time in 1979, the track was then known as Keystone Race Track. In 1986, the track was operated at Philadelphia Park and in 2011, with the dawn of expanded gaming, the name was changed to Parx Racing and Casino. Traditionally held on Memorial Day, the race was then held on or around Labor Day until 2010. From there, with the appeal of using the race as a stepping stone towards the [+]

Breeders’ Cup Classic (G1), the race was moved to the end of September. The race has been continuously held every year except 2006.

The Pennsylvania Derby has consistently attracted some of the top three-year-olds every year and has brought a world-class group of jockeys and trainers to the racetrack. Only one jockey – Joe Bravo – has won the race three times. He piloted Meadow Flight (1994), Grand Hombre (2003) and Anak Nakal (2008). Two trainers – Nick Zito and Woody Stephens – have each saddled three winners of the race. Stephens sent out Smarten (1979), Morning Bob (1983) and Cefis (1988) while Zito had Sun King (2005), Anak Nakal (2008) and Morning Line (2010).

In 2013, Will Take Charge was fresh off of an impressive victory in the Travers Stakes (G1) and was able to parlay his win in the Pennsylvania Derby to a runner-up effort in the Breeders’ Cup Classic which ultimately resulted in the Eclipse Award for Champion Three-Year-Old. In 2014, California Chrome made his much anticipated return to the races after failing in his Triple Crown bid and while he came up short and finished sixth, he would still go on to earn the Eclipse Award as well as the title of Horse of the Year. The winner of the Pennsylvania Derby that year was Bayern who went on to win the Breeders’ Cup Classic (G1).

Following his Triple Crown campaign, which saw California Chrome capture the first two jewels at the Kentucky Derby and Preakness Stakes, anticipation was high for a great run by the crowd favorite, and he went off at the 2014 Pennsylvania Derby at even-money odds. Much to the chagrin of his connections, however, he simply ran flat, and it was up to 7-2 Bayern to collect the win, followed by 7-1 Tapiture, and 6-1 Candy Boy. Those combinations produced $2 exacta and trifect payouts of $48.20 and $183.80, totals that were topped up for horseplayers who cashed in on bonus offers available through Bovada's online racebook.

Even with the presence of Kentucky Derby winner Nyquist and Preakness Stakes winner Exaggerator in the field, others have not been intimidated out of taking a shot at the $1.25 million purse up from grabs in the Penn Derby, and 10 others are expected to go to the gate for the Grade 2 event. Despite recent setbacks - running third in the Preakness, followed by a fourth-place finish in the (G1) Haskell Invitational, with both races run over off tracks - Nyquist has been installed as the 5-2 morning line favorite for the Penn. With good weather expected for Philadelphia on Saturday, the connections of Nyquist are hoping for a return to winning ways. Exaggerator (9-2) on the other hand, has developed a reputation as an off-track specialist, and it will be interesting to see how he handles the Parx Racing surface.

Among the others in the field, the always-game Gun Runner (6-1) ran very well to finish third most recently in the (G1) Travers, but he has had a tough campaign in 2016 and you have to wonder if fatigue will start to set in at some point. Trainer Bob Baffert saddles Cupid (5-1) who comes into this one off of two-straight wins in the Grade 2 West Virginia and Indiana Derbys. Among the double-digit starters, the well-bred Awesome Slew has a win last out at Parx in the (G3) Smarty Jones, where he beat a solid field by more than seven lengths. New Jersey bred Sunny Ridge (12-1) just got up to edge out Nyquist for third in the Haskell.