Bet on The King George VI And Queen Elizabeth Stakes 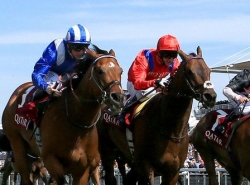 Once run as separate races, the King George VI and Queen Elizabeth Stakes combined as a single event in 1951 and has long been established as Britain’s most prestigious race. Run at a mile and one half on the flat, the “King George,” as it is commonly referred to, is open to horses three years old and upward and held at Ascot Racecourse each July. The race carries a purse of 1,150,000 Euros making it Europe’s second richest race to only the Epsom Derby and regularly attracts the continent’s top competition. Past winners of the King George include many successful sires including the breed-shaping Montjeu (1999) and Galileo (2000) in recent years. Many horses giving favorable performances in the King George go on to run in the prestigious Prix de l’Arc de Triomphe and/or the Breeders’ Cup Turf. In 2011 the King George became part of the Breeders’ Cup “Win and You’re In” system, granting automatic entry to the winner. King George winner Conduit (2009) won the Breeders’ Cup Turf in 2008 and 2009 while several recent winners have completed the Arc double including Montjeu (2000), Hurricane Run (2006) and Dylan Thomas (2007).

Bet on the King George VI and Queen Elizabeth Stakes and other major UK horse races through one of these recommended racebooks.

A son of the great Galileo and a globe-trotting force, Highland Reel added the most significant achievement of his career to his resume with a front-running score over six rivals in the 2016 King George Stakes. The four year-old Aidan O'Brien trainee skipped away to an early lead with Ryan Moore in the saddle and never looked back, besting runner-up finisher Wings of Desire by a clear length. Highland Reel gained entry to the 2016 Breeders' Cup Turf at Santa Anita Park - a logical spot for horse considering his previous success in America where he won the 2015 Secretariat Stakes at Arlington Park.