Bet on The Golden Slipper Stakes 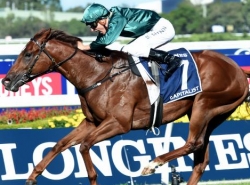 The premier Australian race for two year-olds, the Group 1 Golden Slipper Stakes is held annually at Rosehill Gardens Racecourse in Sydney. The race was inaugurated in 1957 and has been run consecutively since. With its current purse of $3,500,000, the Golden Slipper is the richest race in the world for juvenile runners and has maintained Group 1 status since 1979. The Golden Slipper is contested at 1200 meters (about six furlongs) on a right-hand turf course.

Part of the Sydney Autumn Carnival, the 2016 Golden Slipper represented the 60th running of the race. Traditionally held in early to mid-April, the 2016 renewal was held March 19. Two different trainers – T.J. Smith and Gai Waterhouse – are tied for the most Golden Slipper victories with six apiece, while jockeys Ron Quinton and Shane Dye own the riding record with four.

In the race’s rich history such notable Australian runners as Sebring (2008), Miss Finland (2006), Rory’s Jester (1985), Marscay (1982), Manikata (1978), and Luskin Star (1977) are among the past winners. The Golden Slipper has always attracted fast, precocious runners and has a track record for producing fine stallion prospects. Todman, the first winner of the Golden Slipper, was sired by the great Aussie sire Star Kingdom, who also sired the next four winners of the race.

Bet the Golden Slipper Stakes and other classic Australian horse races with one of these recommended racebooks!

Capitalist showed a late turn of foot to win the 2016 Golden Slipper, holding off a charge from longshot Yankee Rose in the stretch. Capitalist was upset in his previous start, the Group 2 Todman Stakes, but returned to win his fourth race in five tries. Flying Artie finished third, while the favored Extreme Choice finished eighth in the 16-horse field. Capitalist, who also won the $1.89 million Jeep Magic Millions Classic, completed the sweep of Australia’s two richest races for two year-olds.

Check back closer to race day for the 2017 Golden Slipper Stakes contenders!