Bet on The Golden Rose Stakes 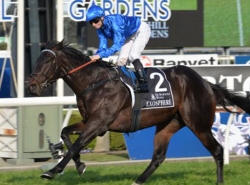 The Golden Rose Stakes is traditionally held at the end of August or early September at Rosehill Racecourse in Sydney, Australia. The race is restricted to three-year-olds and is run on the turf at the distance of 1400 meters which translates to seven furlongs. The race has been a Group 1 event since 2009 and currently offers a purse of $1 million.

The race was inaugurated in 1978 and was originally run as the Peter Pan Stakes in honor of two-time Melbourne Cup champion Peter Pan. The name changed in 2003 to the Golden Rose Stakes and in recent years it was upgraded from a listed race in 2005 to a Group 3, then a Group 2 and now to a prestigious Group 1.

One of the most noteworthy horses to win the Golden Rose Stakes was Kingston Town in 1979. The following year, he was named Australia’s Racehorse of the Year and won the first of what would be three Cox Plates as well as the Australian Derby, Rosehill Guineas, H E Tancred Stakes and several other elite events.

Bet the Golden Rose Stakes and other classic Australian horse races with these recommended online racebooks.

Exosphere added another victory to the impressive stallion resume of Australian superstar Lonhro with a victory in the 2015 edition of the Golden Rose Stakes. Owned by Godolphin Racing, the dark bay colt had plenty to prove after a poor performance in the Golden Slipper (G1) in which he finished last of sixteen rivals.

Though inconsistent, he had shown he could be competitive against top competition and he went to the gate as the favorite in the Golden Slipper. He was allowed to relax off of the pace early under jockey James McDonald while the filly, Speak Fondly, set the pace with Exosphere’s stablemate Holler. He rallied from the outside to win convincingly in a hand ride. Speak Fondly held on gamely for second and Sebring Sun was third.

Check back closer to the race for the contenders for the 2016 Golden Rose Stakes!