Bet on The Falmouth Stakes 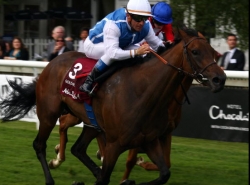 Inaugurated in 1911, the Falmouth Stakes is a Group 1 race for fillies and mares run each July at Newmarket. Originally limited to three year-old fillies, the one-mile race was opened to all fillies and mares in 1974 and became a Group 1 race in 2004. Held on the second day of the July Festival at Newmarket, the Falmouth attracts many of the top filly and mare milers in Europe with such notables as Soviet Song (2004 and 2005) and Goldikova (2009) among its recent past winners. Goldikova eventually became the first horse to win a Breeders’ Cup three times, winning consecutive iterations of the Breeders’ Cup Mile in 2008, 2009 and 2010. Sonic Lady and Soviet Song are the only runners to win more than one running of the Falmouth. Legendary English jockey Lester Piggott won the race seven times while trainer Alec Taylor Jr. saddled six different winners from 1914-1924. The Falmouth has been run without interruption since 1945.

Bet on the Falmouth Stakes and other major UK horse races through one of these recommended racebooks.

Alice Springs broke an 18-year track record in winning the 2016 Falmouth Stakes giving trainer Aiden O’Brien his first victory in the historic race. The classy filly completed the mile in a sensational 1:34:42 with Ryan Moore in the irons – good for a facile two-length score over Very Special in second. Always Smile finished third, while the heavily favored Usherette could do no better than sixth.