Bet on The Doncaster Mile 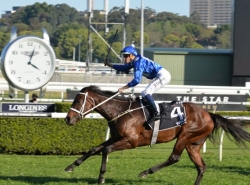 Formally known as the Doncaster Handicap, the Doncaster Mile is a prestigious Australian race held annually at Royal Randwick Racecourse in Sydney Australia. Inaugurated in 1866, the tradition-steeped event is now run on the first day of the ATC Championships Carnival for a purse of $3 million. The race attained Group 1 Status in 1980 and generally features a capacity field of 20 runners.

The race has been run without interruption since its beginning with a venerable list of champions among its past winners. In recent years, such notable runnners as Sacred Falls (2013 & 2014), Haradasun (2007) and Sunline (2002 & 1999) have captured the Doncaster Mile. The spring counterpart to the Doncaster Mile is the Epsom Handicap with Super Impose making history in 1990 and 1991 in becoming the only horse to win both races twice.

Longtime Aussie trainer T.J. Smith holds the Doncaster Mile training record with seven wins. Belmura Lad holds the speed record, stopping the timer in 1:33.70 in 1979. Despite the name, the Doncaster Mile is not run at exactly one mile, but was conducted at that distance prior to the Aussie conversion to the metric system in 1973.

Bet the Doncaster Mile and other classic Australian horse races through one of these recommended racebooks.

Champion mare Winx made it nine wins in a row while taking the 2016 Doncaster Mile. Sent to post as the heavy favorite, Winx settled far back and looked to be in a bit of trouble against her 14 rivals - most of them the opposite sex. But the champ once again demonstrated her talent and courage, picking off runners in the stretch to the delight of the 22,000 fans gathered at Royal Randwick. Winx, a five year-old mare, got the better of six year-old gelding Happy Clapper who had to settle for second best. Another five year-old mare - Azkadellia - turned in a fine effort for third.

Check back closer to race day for the 2017 Doncaster Mile Contenders!