Bet on The Doncaster Cup 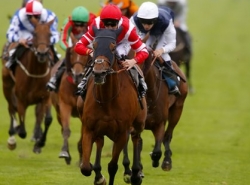 The Doncaster Cup has the distinction of being the oldest race at Doncaster in Great Britain and was run for the first time in 1766. The race has evolved significantly since those early days and was originally run as a true marathon at over four miles. These days, the race is contested on the turf at 2 ¼ miles, still a demanding and arduous test of stamina for the modern Thoroughbred. The race is currently a Group 2 event and is open for horses of either gender, three-year-olds and upward.

The race traditionally attracts a hard-knocking group of veterans and several horses have won multiple editions. In the 1800s, Beeswing won the race four times and in contemporary times, Double Trigger has the distinction of the most wins. He won the race in 1995, 1996 and 1998 and did so with three separate jockeys. Jockey Joe Mercer has the record of the most victories in the irons with eight and trainers Cecil Boyd Rochfort and Sir Henry Cecil are tied with seven wins each. In 2003, the veteran ten-year-old Persian Punch became the oldest modern horse to win the race.

Bet on the Doncaster Cup and other major UK horse races through one of these recommended racebooks.

The 2016 edition of the Doncaster Cup was a memorable one for many reasons. It was the 250th anniversary of the historic race and it did not disappoint. Veteran campaigner Sheikhzayadroad prevailed in a thrilling photo finish, getting his nose in front of a gallant Quest for More who set the early pace and fought back when pressed. Martin Harley was in the irons for trainer David Simcock. Sheikhzayadroad had been knocking on the door of a victory since returning to Great Britain from Dubai and had been keeping top company in the Goodwood Cup (G2) and Gold Cup (G1).

Sheikhzayadroad, a seven-year-old, has had a remarkable, international career and top class stakes winner in three separate countries. The victory in the Doncaster Cup was his second of the year and he is potentially on target to return to Canada and compete at Woodbine where he is a two-time graded stakes winner.

Sheikhzayadroad stopped the clock in 3:52.97, the third fastest time in the past decade.