Bet on The Darley July Cup 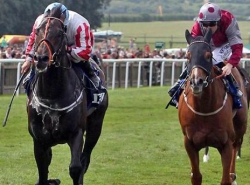 Inaugurated in 1876 and now sponsored by Darley, the July Cup is held on the final day of Newmarket’s five-day meeting during the month of July. Contested at six furlongs for a purse of $500,000 Euros, the race attracts top European sprinters with many notable horses among its past winners. The July Cup earned Group 1 status in 1978 and became part of the Global Sprint Challenge – a series of six sprint races spread across England, Australia and Japan – in 2008. Sundridge is the only horse to win the July Cup on three occasions, racking up consecutive wins from 1902-1904. Legendary English jockey Lester Piggott won the July Cup an astounding ten times, while trainers Charles Morton and Vincent O’Brien each won five editions of the race.

Bet on the Darley July Cup and other major UK horse races through one of these recommended racebooks.

Sent to post as the 9/2 favorite, Limato won the 2016 July Cup by two lengths with a late surge. Ridden by Harry Bentley and trained by Henry Candy, the four year-old gelding notched his first Group 1 victory in style over the firm turf. 25/1 shot Suedois finished second, a head better than Quiet Reflection in third. Limato made it 10 placings in 11 career starts and showed his versatility while cutting back to a sprint distance after running at a mile. The field of 18 included 2015 Breeders’ Cup Sprint winner Mongolian Saturday who was prominent early before fading to finish eleventh.