Bet on The Caulfield Guineas 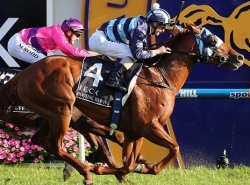 The Caulfield Guineas is one of the most coveted races in Australia for three-year-olds. The race, held annually every October at Caulfield Racecourse in Melbourne, is restricted to sophomores and offers a purse of $1 million. The Caulfield Guineas was inaugurated in 1881 and is contested on the turf at a distance of 1600 meters or, eight furlongs (one mile). It has held Group 1 status since 1979 and is widely viewed as an important race for any potential stallion to win.

With such a long and storied history, the Caulfield Guineas has been the showcase for some of the top horses in Australian racing lore. In recent years, the race has been won by horses like Lonro (2001) who went on to join the Australian Hall of Fame and was named the World Champion Miler in 2004. He completed his career with a total of 11 Group 1 wins and the Caulfield Guineas was essentially an unveiling for him. Among other stars, the race was won by Redoute’s Choice (1999) who went on to become a legendary sire as well as Surround (1976) who became the only filly to win both the Caulfield Guineas and the Cox Plate.

Bet the Caulfield Guineas and other classic Australian horse races through one of these recommended racebooks!

In the 2015 edition of the Caulfield Guineas, it initially appeared that the front-running Press Statement would have his work cut out for him when he drew post position fourteen in the field of sixteen, a disadvantageous position for the colt. Despite that, he still went into the gate as the favorite.

With a sharp break, Press Statement quickly secured the early lead and from that point on, he made every call of the one mile contest a winning one under jockey Hugh Bowman, no stranger to success on Australia’s greatest stage. He prevailed by 1 ¾ lengths over Lizard Island and Ready for Victory despite competing on a track that had been playing against front-runners all day.

Check back closer to the race for the contenders for the 2016 Caulfield Guineas!