Bet on The Caulfield Cup 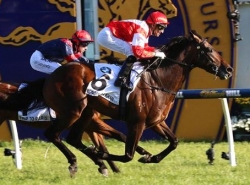 Held annually in October in Melbourne, Australia at Caulfield Racecourse, the Caulfield Cup is one of the most prestigious races in the country for older horses. It was inaugurated in 1879 and has grown into one of the richest races not only in Australia, but in the world. There is a purse of $3 million and the race is contested at 2400 meters or, roughly 12 furlongs or a mile and a half and is held on the turf. The race is a qualifying event for the world renowned Melbourne Cup which is held several weeks later. The field is limited to eighteen entrants and there are four additional horses as also-eligibles.

No trainer has won the Caulfield Cup more times than Australian legend Bart Cummings. He has saddled seven winners and of those horses, two have gone on to sweep the Caulfield Cup and Melbourne Cup Double  - Gaillee in 1966 and Let’s Elope in 1991. Horses from outside of Australia were restricted from participating until 1998 and since then, the doors have opened and it has turned into a truly international race with recent horses winning from Great Britain, Dubai and France.

Bet the Caulfield Cup and other classic Australian horse races through one of these recommended racebooks!

The 2015 edition of the Caulfield Cup drew a full and competitive field but there was one major standout – Mongolian Khan. A star the year before, he had won five races in a row as a three-year-old the previous year including the New Zealand Derby and had proven himself to be a force to be reckoned with in longer races.

His four-year-old season, however, had been a disappointment. He struggled in his first two starts and began to show modest improvement in his final prep race for the Caulfield Cup with a third-place finish. Despite that recent record, he went to the gate as the 4-1 favorite in the Caulfield Cup. With just under a quarter of a mile remaining in the race, he seized the lead and held off a challenger from Great Britain, Trip to Paris. The German contender, Our Ivanhowe, was third.

Check back closer to race day for the contenders of the 2016 Caulfield Cup!