Bet on The BMW Stakes 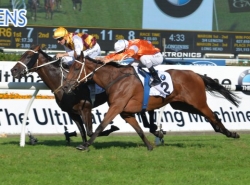 The BMW Stakes is also known as the H E Tancred Stakes and is run in either March or April annually at Rosehill Gardens Racecourse in Sydney, Australia. The Group 1 event is open to three-year-olds and upwards and is contested on the turf at the distance of 2400 meters which translates to twelve furlongs or a mile and a half. The purse has increased to $1.5 million in recent years.

The race was inaugurated in 1963 and was named after Henry Eugene Tancred, a former chairman of the Sydney Turf Cup. The name of the race has evolved over the years since BMW came onboard as a sponsor in 2002. The distance has largely remained at 2400 meters but in 1964 it was contested at only 2000 meters or a mile and a quarter.

Some of the all-time greats in Australia’s racing history have won the BMW Stakes including Makybe Diva in 2005, the same year in which she won both the Melbourne Cup and the Cox Plate and was named Australis’s Racehorse of the Year as well as that year’s Champion Stayer and Champion Mare. The only two horses to win multiple editions of the race were Octagonal (1996, 1997) and Tie the Knot (1999, 2000).

Bet the BMW Stakes and other classic Australian horse races through one of these recommended racebooks.

The 2016 edition of the BMW Stakes turned out to be one of the most thrilling races of the season. With a field of ten talented contenders, it was three-time Group 1 winner Preferment who went off as the favorite despite questions about whether or not the 2400 meters was his ideal distance.

Under a masterful ride by Hugh Bowman, Preferment sat off of the pace and launched a bold bid to hit the lead in the stretch. From there, he gamely held off a rally from his stablemate Who Shot Thebarman to win by a neck. Trainer Chris Waller saddled the entire trifecta of the BMW Stakes as Grand Marshall, a longshot, ran on well to get third.

Check back closer to the race for the contenders for the 2017 BMW Stakes!